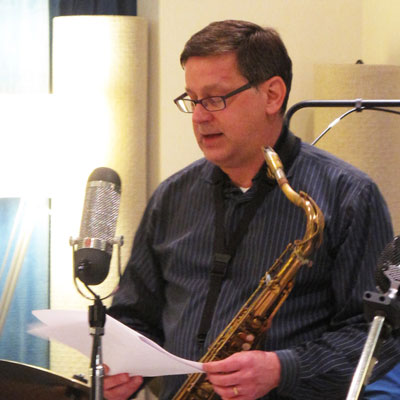 Steve Griggs is a composer, saxophonist, and writer based in Seattle. He earned a Bachelor of Music in Saxophone Performance from University of Illinois in Champaign/Urbana. Since moving to Seattle in the 1990s, he has played with the Jim Knapp Orchestra and Milo Petersen and the Jazz Disciples. He won a Longfellow Chorus Award of Distinction in the 2010 Longfellow Chorus International Composers Competition for his setting of the poem “Moonlight.” Steve’s current projects weave historical narrative with original composition and improvisation to explore the past of Seattle’s non-white communities. The theme for Panama Hotel Jazz is Japanese American incarceration during WWII. A Cup of Joe Brazil illustrates the jazz saxophonist’s community building through music in the face of racial discrimination. Performances of these two projects were supported by the Chamber Music America Residency Partnership Program and the Seattle Public Library.

Artist Support Program 2017: Record six songs and narrations for the program Sound in Stone: Music in the Sculptures of James Winston Washington.

Artist Support Program 2015: Record and mix the narrative and music program for A Cup of Joe Brazil, an audio documentary about an important figure in Seattle’s cultural history.

Artist Support Program 2013: Perform oral history recording, digital preservation of historic recordings, and production of audio excerpts for a blog and biography about the life and impact of Joe Brazil.