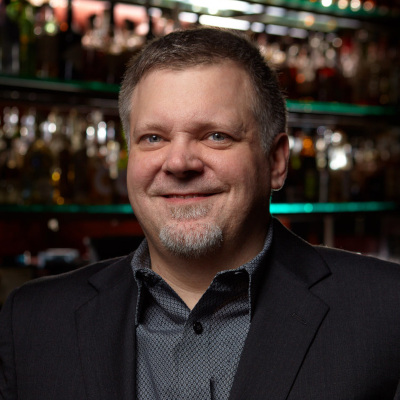 Rik Wright is a true musical chameleon, adapting to a wide spectrum of influences. Listeners will discern a jazz foundation, a solid infrastructure of rock, and binding it all a voice so original that it cannot be called either. As one who grew up with Jeff Beck on one shoulder and Jim Hall on the other, Wright bears the mark of a generation that burned bridges between genres. When an injury stopped him from gigging altogether, he re-evaluated his craft and, for the first time in a decades-long career, began making music purely for its own sake. If he was ever to get back in the game, he knew it would have to be on his own terms.

The result of this paradigm shift was the assembly of Rik Wright’s Fundamental Forces, which became the primary stage for its leader’s compositions. As a collective they interchange jazz-oriented freedoms and rock band rigor, a rare combination. Yet their music goes beyond the mere fusions such a characterization implies. Over the next two years, an organic, groove-oriented style emerged as Wright imprinted his compositional voice across a songbook of robust themes and improvisations. Thus, the seeds of their debut recording were germinated.

Like the forces driving them, fundamental too are the tunes themselves. The band invites appreciation at every turn, and a whole new crop of listeners became aware of this with the release of their second album, entitled Red. Red expanded the Fundamental Forces universe with an even deeper feel and texture. That the album hit #1 on the CMJ jazz chart was no small testament to the integrity of Wright’s vision. And the success continued with the following two albums. Altogether, Rik Wright’s Fundamental Forces has placed four full-length recordings in the Top 10 of the Roots Music and CMJ Jazz radio charts.