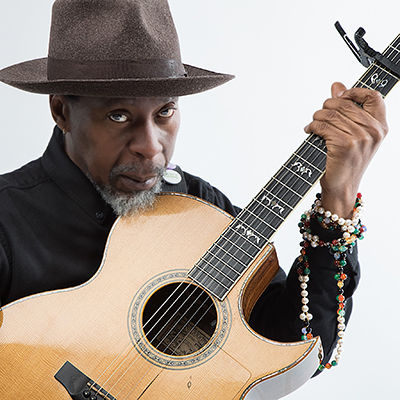 Reggie Garrett has performed throughout the US and Canada for many years, presenting mostly original songs mixed with pop covers and traditional folk ballads.  His music is quite diverse, tapping into urban acoustic Folk music, Gospel, Latin rhythms, Blues, Celtic and many other forms.  He performs both solo and with his group Reggie Garrett & the SnakeOil Peddlers.  Since its inception Reggie has carved out his own unique sound.  He has been compared to acoustic legends Richie Havens and Bill Withers by the national folk publication Dirty Linen. He doesn’t consider himself to be a Bluesman – even so Living Blues  magazine featured him in an article in the August 2018 issue.

Mr. Garrett was trained and educated as an artist, receiving his Bachelor of Arts in Fine Arts from Williams College, and a Masters in Painting from SUNY Albany.  Since then he has spent time as a starving artist in New York City, worked as a Systems Engineer for IBM, worked in computer center planning and disaster recovery planning and taught English, History and Math at the high school level.  For a number of years he also taught in a college level program at that guided high school dropouts into and through college.  Through it all he has worked as a musician, as a bassist and vocalist in several rock bands, more recently as a vocalist and guitarist, both solo and with his own ensembles.  He has six CD releases to his credit and has had songs included in a number of compilations over the years.

2021 Artist Support Program: Compose and record a collection of songs dealing with the experiences of Black Americans throughout the nation’s history.