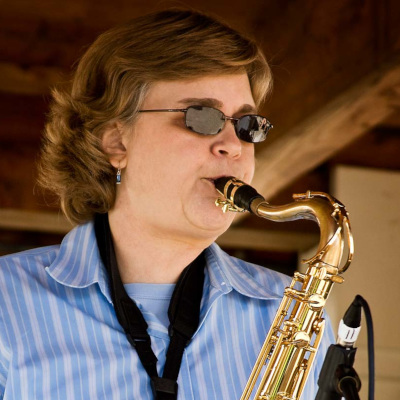 Inspired by her experience in the Big Apple, Cynthia Mullis plays saxophone with East Coast flair and West Coast sensibility. After moving to New York City in 1993 to study with the legendary saxophonist Jimmy Heath, she immersed herself in the NYC jazz scene, paying dues and performing with world-class musicians.

From 1994-2000 she was a member of the all-women big band Diva in NYC. With Diva, she toured extensively across the United States and Europe, backing such artists as Diane Schuur, Joe Williams and Dave Brubeck, and performing at the Blue Note, Birdland, the Kennedy Center, and jazz festivals in Berlin, Montreal, and Switzerland. Cynthia can be heard on two of Diva’s CDs, Leave It to Diva and I Believe in You.

Since moving to Seattle in 2000, Cynthia has continued to perform with a notable list of musicians, as well as record two CDs as a leader, Inside Job and Analog Honking Device. Cynthia was also featured on SWOJO’s recording Meeting of the Waters, and performed with SWOJO at the Lima, Peru Jazz Festival in 2007. Cynthia holds a Master of Arts in Jazz Performance from Queens College in NYC and a Bachelor of Music Performance degree from the University of Northern Colorado.