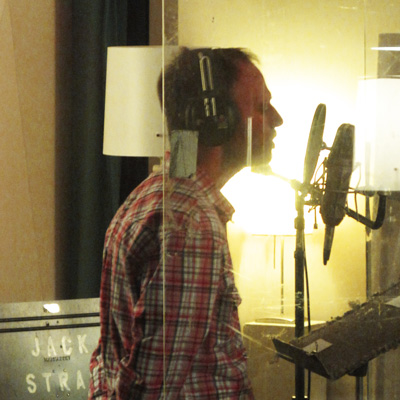 Roden’s working process uses various forms of specific notation (words, musical scores, maps, etc.) and translates them through self invented systems into scores, which then influence the process of painting, drawing, sculpture, and composition. These scores, rigid in terms of their parameters and rules, are also full of holes for intuitive decisions, failures and left turns. The inspirational source material becomes a kind of formal skeleton that the abstract finished works are built upon.

In the visual works, translations of information such as text and maps, become rules and systems for generating visual actions such as color choices, number of elements, amounts of time and form building.

In the sound works, singular source materials such as objects, architectural spaces, and field recordings, are abstracted through humble electronic processes to create new audio spaces, or possible landscapes. The sound works present themselves with an aesthetic Roden has described as lower case – sound concerned with subtlety and the quiet activity of listening.

Roden has been exhibiting his visual and sound works since the mid 1980’s, and has had numerous solo and group exhibitions internationally. In 2010, curator Howard Fox organized the exhibition “steve roden / in between: a 20 year survey”, which opened at the Armory Center for the Arts in Pasadena, and was accompanied by a full color catalog.

Roden has performed his soundworks at various arts spaces and experimental music festivals worldwide. Recent performances include John Cage’s Cartridge Music with composer Mark Trayle at the Norton Simon Museum in Pasadena, and a tribute to Rolf Julius at the Hamburger Banhof Berlin. Since 1993, Roden has released numerous CDs under his own name as well as under the moniker “in be tween noise” on various record labels internationally.

He has created numerous site-specific sound works for spaces such as MOCA at the Pacific Design Center in response to a group of paintings by Mark Rothko, the Henry Art Gallery’s James Turrell Skyspace, the Mak center for Art and Architecture/Schindler House in Los Angeles, a live collaboration with Stephen Vitiello in a room of 50 pieces of sculpture by Donald Judd at Chinati, Daniel Libeskind’s Run Run Shaw new media building at City University of Hong Kong, a sound/sculpture/drawing installation for Thomas U. Walter’s 1848 building at Girard College Philadelphia for the Hidden City festival, and a permanent public artwork at Hayvenhurst Park, in West Hollywood California.

In 2011, the Atlanta based record label Dust to Digital published Roden’s  “I Listen to the Wind that Obliterates My Traces” – a 250 page hardback book containing hundreds of music related photographs from 1860-1930, along with 2 discs of rare recordings of early American music culled from Roden’s archive, and an essay on archives, collecting and listening. The book has received praise from the Los Angeles Times, Chicago Reader, Record Collector, Pitchfork, and others.

Artist Support Program 2010 (with Steve Peters): Not a Leaf Remains as It Was, an album of experimental songs using Japanese jisei as lyrics.