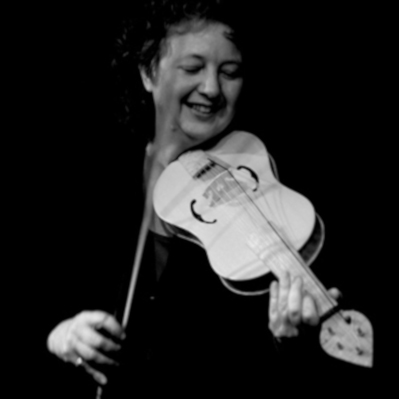 Fiddler Ruthie Dornfeld’s big tone, fierce rhythm and fluid style, along with a wildly eclectic repertoire, have won her popularity among dancers and concert audiences alike. Fluent in a wide range of traditional styles (Irish, American old-time, Scandinavian and Eastern European, for starters), she has performed and taught for over forty years throughout the USA and from the Manaus Operahouse in the Brazilian Amazon to the Sibelius Academy in Helsinki, Finland.

Now settled in Seattle, Ruthie keeps busy as a member of 3 Fiddlers, 3 Traditions (together with Danish fiddler Kristian Bugge and Métis fiddler Jamie Fox), the tango band Tangoheart, accompanying country singing duo Margo Murphy and John Roberts, and playing for local dances. Ruthie also plays a 5 string medieval fiddle (vielle), and her compositions for that instrument are featured in the recording Lay of the Waves, for which she received grants from Artist Trust and the Jack Straw Foundation.

Artist Support Program 2009: Lay of the Waves, an album of original compositions for the 5-string vielle, a medieval percursor to the violin.