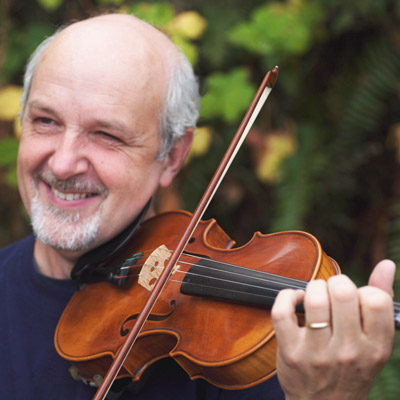 Randal Bays is an American musician who’s been playing Irish fiddle for more than thirty years. He’s now widely recognized as a master of that complex and ancient art, in particular the fiddle styles of rural western Ireland. In the early ’90s Randal formed his own label, Foxglove Records, which was one of the first independent labels that came into existence with the dawn of the internet age. On Foxglove he released a string of well received CDs, some of which became classics of the genre, such as The Salmon’s Leap (1999), recorded in the back room of his house in Seattle.

Bays is nearly as well-known for his fingerstyle guitar work as for his Irish fiddling. With a strong early training in classical guitar, Randal had the great good fortune to live down the street from the pioneering Irish DADGAD guitarist Mícheál Ó Domhnaill in Portland, Oregon in the early eighties. Although immersed in the fiddle at the time, Randal had many a late-night session with Micheál, learning the DADGAD tuning and absorbing the musical thought behind the playing of this great musician.Randal released the solo guitar album Oyster Light, which began as a Jack Straw Artist Support Program project, in 2010.

Besides his touring and recording successes, including concerts and festivals in the U.S., Europe and Canada, Randal is a highly respected as a teacher of Irish fiddle. Some of his students have gone on to become performers and teachers themselves, helping to extend and deepen the tradition of Irish fiddle music in North America.

Artist Support Program 2014: Record an album of the traditional Irish style music that’s been played and created in the Pacific NW over the last few decades.