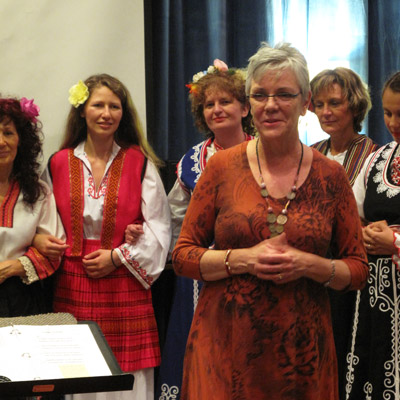 Mary Sherhart is a Seattle-based singer, performer, teacher and ambassador of the music of Eastern Europe. Mary is currently choir director of the Bulgarian Voices of Seattle Women’s Choir. Its 35 members were all born in Bulgaria and range in age from 23-80. This choir is a program of the Bulgarian Cultural and Heritage Center of Seattle on which Ms. Sherhart serves as an advisory board member. Mary produced the Tazi Baba / This Baba documentary film and Penka Encheva and Friends CD, produced at Jack Straw Cultural Center through the Artist Support Program.

Mary was founding president of Sevdah North America, a non-profit organization formed to preserve and promote sevdah, the traditional music of Bosnia and Herzegovina, in Diaspora communities. She toured and recorded with legenday sevdah artist Omer Pobric. As choir director she led the Vecerinka and Sedyanka Balkan Women’s Choirs, New Land Choir, and Vela Luka Croatian Ensemble choir. Mary directed the major musical production “Joyous Nativity, a Croatian Cantata” a 3-year project culminating in performances of Croatian composed and traditional music in three Pacific Northwest venues including St James Cathedral. She studied and performed from 1983-84 with the professional folk choir of Ensemble Varna in Bulgaria. Mary was soloist in local groups Balkan Cabaret and Aegean View, and appeared with numerous other groups over her long career. Mary’s path started in 1970 as a teenager in Seattle’s Koleda Ensemble. The years and experience have added to her personal belief in the healing powers of music. The joy of singing and finding one’s passion are interwoven throughout every performance and workshop.