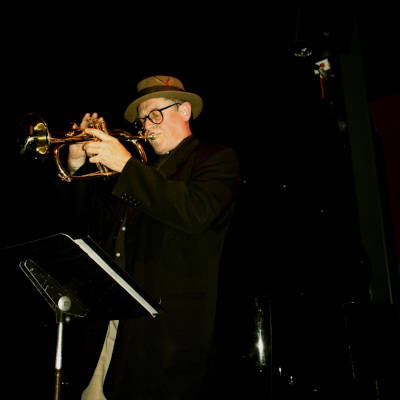 Trumpeter Jim Knodle has been playing with jazz outfits since the early ’80s (initially on the west cast, before relocating to Ballard, Washington, where he now resides). Past groups have included Circular Cowboys, Inside Out, and This Room (with singer/songwriter/multi-instrumentalist Sue Ann Harkey), before launching his own solo career in 1999, with the Louie Records release Unprepared. Knodle has also lent his playing talents to recordings by other artists, including the Jim Basnight Thing’s Jim Basnight Thing, Kelly Fernandi’s Song for Parents and Kids Too, Aiko Shimada’s Another Full Moon, the Tone Sharks’ Report from a Log, Gary Michael Tipton’s Tales of Majesty, and Lynette Westendorf’s Surrounded by Green. Knodle’s playing can also be heard on such various artist collections as Tribute to the Left Banke: Shadow Breaking Over Our Heads and Full Circle: A Tribute to Gene Clark.

Artist Support Program 1999 : Recorded the album Wending together with Anansi.