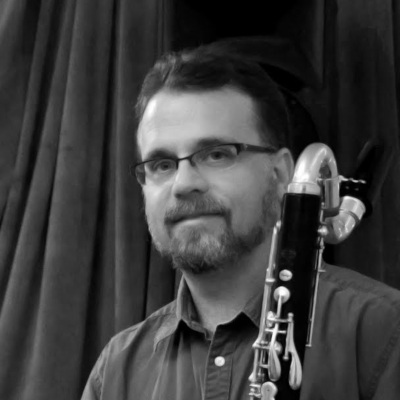 Jesse Canterbury has played new music of many varieties for years:  performances have ranged over jazz, new and old classical music, and free improvisation.  He has performed on countless premieres of new works by emerging and established composers and has given concerts of some of the masterpieces of modern chamber music.  As an improviser, he exhibits a wide ranging vocabulary, built on a thorough knowledge of the clarinet including the various “extended” techniques.  He can be heard on a variety of recordings, highlights of which include collage/décollage, an album of chamber music for two clarinetists (with William O. Smith) and several recordings with the Tom Baker Quartet and the Tom Varner Tentet.  Canterbury’s own compositions can be heard on the contrasting albums Vertigo (clarinet, cello, guitar, and trombone) and Here/Now (clarinet, piano, bass, drums).  Based in the San Francisco Bay Area, he performs with sfSound and Dan Plonsey’s Daniel Popsicle.