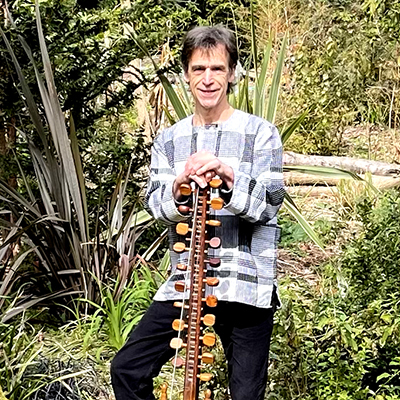 Chester was born in Detroit, one of the great centers of American music, and, at a particularly exciting time, raised on a steady diet of Motown soul, early 60’s folk, neighborhood garage bands, jazz, and the rock explosion of the counterculture 60’s. However, within this wide range of styles he was beginning to learn how strong and important the African-American component was. Chester came to the playing of music relatively late, after he’d graduated from Kalamazoo College as an English Literature major. Drum set, saxophone, and flute were early interests. After moving to Seattle in 1978, he had my first experiences of playing professionally. During that time Chester was attracted to the University of Washington Ethnomusicology Dept., where he studied both Filipino Kulintang and Turkish Ottoman classical music. He played ney in the UW Ottoman Ensemble from 2000-2004 under the direction of Munir Nurettin Beken, with whom Chester also studied style and repertoire on an individual basis. In 2002, he began my study of West African kora music with Kane Mathis, later traveling to Gambia in both 2004 and 2007 to study with the great kora master Malamini Jobarteh while living in his compound. Since then he’s played in and around Seattle in various venues, forming my first trio in 2015, Trio Abaraka. As a retired chef, he is now increasingly able to devote the time and energy required to achieve a fair amount of mastery on the instrument, and to pursue those elements of African musical culture that have always been so attractive to him.