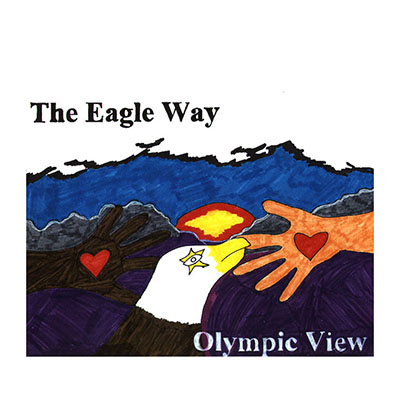 To celebrate Olympic View Elementary School’s 100th anniversary in 2002, Jack Straw Cultural Center and the fifth grade classes conducted a comprehensive, multi-media project exploring the history of their school, its community, and its neighborhood.

First, the students designed a flag (pictured on the right) symbolizing what the school means to them, and presented it to Olympic View Elementary as a gift. The flag represents compassion, integrity, following rules (even when no one is watching), and treating others as we want to be treated.

To jumpstart the project and to stimulate student interest, local historian Walt Crowley gave the students an historical introduction to the school and community. His website HistoryLink also provided extensive materials to support the project. The students then learned interview techniques from Jack Straw mentors to prepare for their interviews with Olympic View alumni and other community members to obtain their oral histories. Then using all the gathered material, the students developed three different projects for the anniversary.

For the first one, Olympic View’s Place in U.S. History, students incorporated facts and anecdotes tracing the history of cultural shifts within the community.  For Voices of Olympic View they created original radio plays based on stories taken from oral history interviews the students conducted with community members. The last project, History of Our Houses, was an in-depth look at the design, construction and occupant history of houses in the Olympic View neighborhood. Below are the detailed accounts of each project.

Based on the interviews with community members and a short history pamphlet that they found, students made a timeline of events that happened simultaneously in the world at large and at Olympic View, and presented it as a powerpoint show, ready for your viewing below.

One period covered was the Cold War that began in the 1950s. In the 1950s, students walked to school, there was a a cloak room, and there were separate playgrounds for boys and girls. A teacher named Mr. Onishi taught fifth grade. During the Cold War, students at Olympic View had to participate in regular air raid drills because of the nationwide fear of being bombed by Russia. Students also learned about Communism in Russia and about space travel to the moon. Each student created three slides that linked what was happening in the world during a specific decade, what was happening at Olympic View during that decade and finally, how the event affected students during that period in time. See below the slides of a series of events that happened on The Blue Day by Erica Davenport. 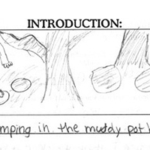 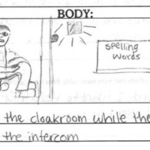 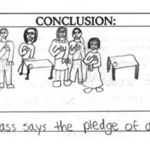 Students worked in teams with Jack Straw artists to develop radio plays based on stories told in the oral history interviews. After writing their scripts and rehearsing their characters, the students came to the Jack Straw Cultural Center to work with engineers and record and produce their dialogue, period music, and sounds in out studios. Listen to the produced pieces below.

The students also designed CD Jackets for the covers of their radio theater CDs. 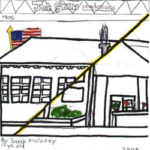 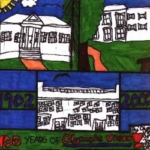 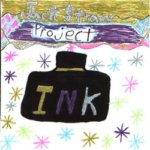 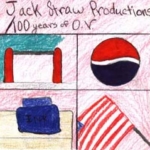 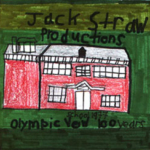 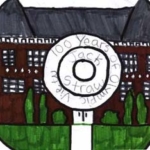 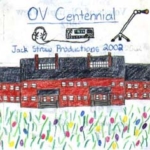 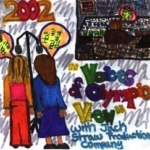 As a tool to fulfill writing standards, each student wrote an expository paper describing their experience creating the scripts and recording them. In the fifth grade memory book, many students wrote that their experience working with Jack Straw on “Voices of Olympic View” was the favorite memory of their whole elementary school experience. Said teacher Melanie Olson, “I loved it too.”

History of our Houses 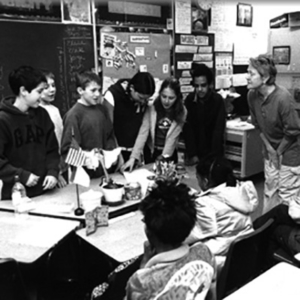 In discussing the history of Olympic View Elementary and Seattle, teacher Melanie Olson discovered that many of the students in the class lived in houses built in the early 1900s. In fact, at least one student had a house that was built in every decade that the school had existed.

The students did research on the internet about when their homes were built, the houses’ architectural style, and even ownership history. They also discovered interesting facts such as all the houses built in the early 1900s were made of wood, and that there was a construction boom in the 1950s after WWII and a large number of houses were built during this period. See below the hand-drawn images as well as the written history of the individual homes. 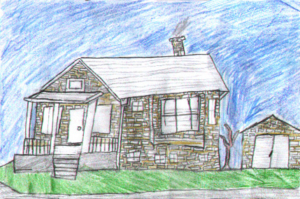 Sarah Maloney
My house was built in 1910. It is part of the Cloverdal Addition. Building number one (I’m not exactly sure what that means but I think it means my house was first in my neighborhood). We put vinyl sidings over the old bricks when we bought the house. The total living square feet is 1060. The first floor is 920 square feet, the half floor (mezzanine) 140 square feet, and the basement 890 square feet. Our house has been remodeled a lot, for example our stairs were moved from one side of our kitchen to the other side. The most interesting thing about my house is that it is 92 years old, almost 100 years old. 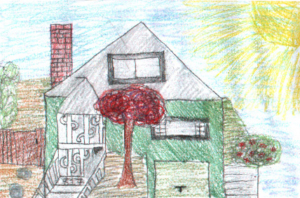 Elise Brown
My house was built in 1928. Two families before us built the upstairs of our house all by themselves, that is why some of the walls upstairs are even crooked! Some families before us had about eight kids living in our house all at once. I have a big deck by the back of my house and in my backyard there is a tree house. In the front of my house, there is a small porch. 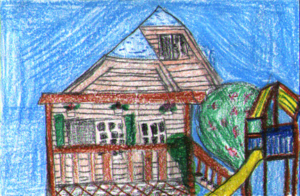 Yejeong D. Keating
My house used to be a log house in 1940, two houses together, but now they are separated and have fences. My house is a three-story house. There are three bedrooms, two bathrooms, a big playroom, laundry room, and one guest room/ storage room. In the back of my house there is a playground, a big deck, garage, a beautiful fountain, wooden swing chair, and extraordinary gardens in the front and backyard. My house is a very cozy, warm, cute, and wonderful house. 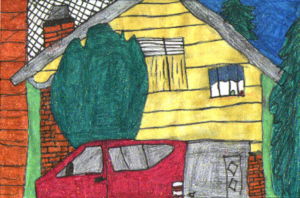 Natalie Wilson
My house is special because it used to be landscaping and nursery offices in 1968. My house has a brick fireplace with a built-in heater and a blue bathtub! What I especially like about my house is that it is right across from Larry’s Market, and lots of other useful shops and stores. It has a large back yard with lots of big trees, including a pear tree, a plum tree, a black cherry tree, and a cherry tree. It also has a giant evergreen tree in it. 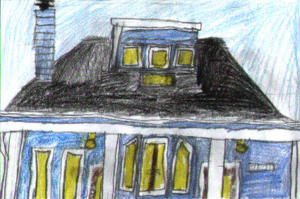 My house was made in the year 2000. My house is surrounded by houses and I have a long driveway. In my house I have 5 rooms. In my parents’ room they have a big closet and bathroom with a big shower and tub. My kitchen is connected to my family room and my living room is behind my kitchen. I have 2 decks, a garage, and a small backyard. 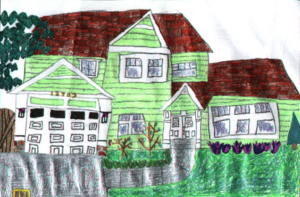 Tiffany
My house was made in the year 2000. My house is surrounded by houses and I have a long driveway. In my house I have 5 rooms. In my parents’ room they have a big closet and bathroom with a big shower and tub. My kitchen is connected to my family room and my living room is behind my kitchen. I have 2 decks, a garage, and a small backyard.