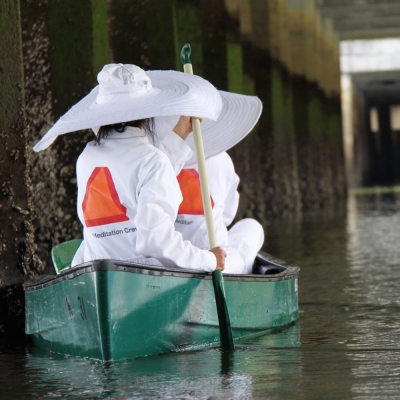 Meditations on Water is composed of works by artists inspired by the waters surrounding Seattle, as they partnered with City Meditation Crew to slow down and notice their environs one moment at a time. City Meditation Crew is a fictitious city department and performance art group who works throughout the US.

Meditations on Water includes an archive of photographs, sound works and objects. We see and hear City Meditation Crew paddling meditatively along the Duwamish River, a recovering Superfund site where wildlife, industry, and commerce intersect with diverse human communities. In addition, we listen to Janet Norman Knox’s poetry about the disappearing viaduct/I99; a sound composition by Susie Kozawa as she plays Pier 56 and found objects such as seaweed as instruments; and a narrative by Linda Shaw that embodies her attentive travel and passage on the Seattle ferry.

Meditations on Water features hand made “river rocks” by lead guest artist Vaughn Bell and the passers-by she engaged along the Duwamish River and its head waters in summer 2016. Bell hosted a series of rock making events at Jack Straw over the course of the exhibition.

City Meditation Crew is a fictitious city department tasked with inspiring hurried pedestrians to slow down and notice their environs one moment at a time. Members remain nameless to the… 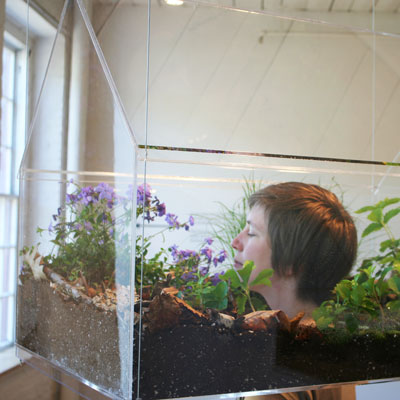 Vaughn Bell is an artist who explores the paradoxes and possibilities of how we humans relate to our environment. She has exhibited and installed her sculpture, performance, video and public…