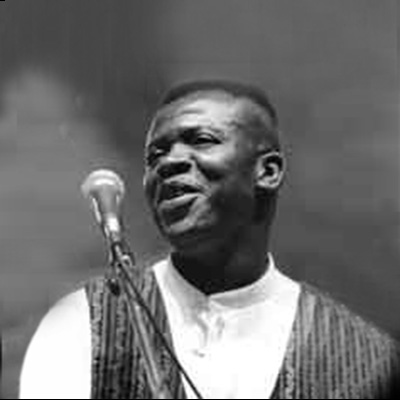 Wawali Bonane was born in Banningville (now Bandundu), in the Democratic Republic of Congo (ex-Zaire). He was weaned on the sounds and rhythms of the Bandundu region. In 1966, Wawali dropped out of school with friend and partner Pepe Kalle, now one of Congo’s top stars, to form their first band, Les Monkoy.

In 1974, Wawali was invited by superstar Tabu Ley Rochereou to join his band, Afrisa International. Throughout his career Wawali has been creating hybrid music known as soukous, a popular style that first came to prominence in the 1950’s and combines elements of Cuban rhumba and Antillean music with Congolese aesthetics.

Following the soukous scene from Congo to Paris, the international center for soukous, Wawali was a mainstay on the scene, working as a support singer for a variety of performers and pursuing his own solo projects. After leaving Afrisa International, Wawali and longtime partner Steve Mgondo came to Seattle and tenaciously dug in with their band Yoka Nzenze. Later, they were joined by renowned soukous guitarist Nseka Binwela (a.k.a. Huit Kilo). They are also supported by an ever-changing variety of Seattle-based backing musicians.

He one of the African immigrant artists whose music was featured in Safarini, a music album developed and produced by Jack Straw and Rakumi Arts International to promote the work of African immigrant artists. Three songs on Safarini feature Wawali Bonane and Yoka Nzenze – Tcheni Tcheni, Wumba Wumba and Kusanga Ema. “Tcheni Tcheni” means “don’t worry, don’t worry”, Wumba Wumba gives  lessons on how to live a productive life, and Kusanga Ema is a love ballad to a woman named Kusanga, in a Congolese rhumba/calypso style. Wawali describes the singing as “like talking to someone… when you are in love, you forget your mother and everyone, but sometimes the person you love is not the one you can stay with forever”. The Safarini compact disc was released by Smithsonian Folkways Recordings in 2000.