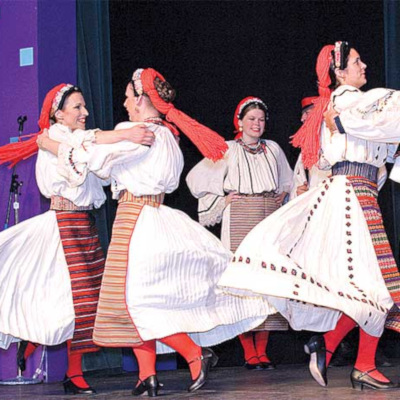 The Vela Luka Croatian Dance Ensemble, founded in 1975, perform music and dance of Croatia and the United States.  Anacortes, home of the Vela Luka Croatian Dance Ensemble, is located on Fidalgo Island in the Northwest corner of Washington State.  One-quarter of the residents of this unique community are descended from immigrants from another fishing village:  Vela Luka, on the Island of Korčula, Croatia.  The performers in Vela Luka represent four generations of Croatian Americans who have introduced their culture’s extraordinary choreography, music, and instruments to people all over the world.  Forming a cross-cultural link between the Puget Sound region and Croatia, the company strives to preserve Croatian folkways and culture for generations to come.

The Ruže Dalmatinke Orchestra, a Seattle-based, professional ensemble, specializes in the music of Croatia and Bosnia.  The group was founded by two sisters, Binki Franulović Spahi and Alma Franulović Plancich, who immigrated with their family to the United States after World War II from their native town of Vela Luka on the island of Korčula, Dalmatia in Croatia.