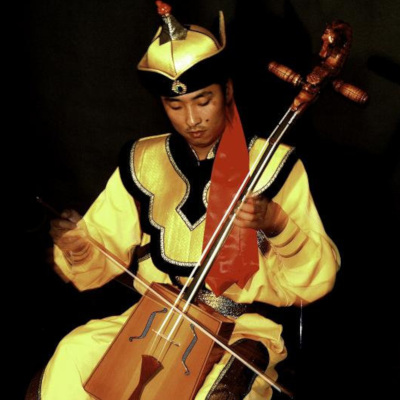 Born in outer Mongolia, Urtaa Gantulga began studying morin khuur at the age of eleven. The son of a traditional Mongolian wrestler, Urtaa began racing horses at 5 years old and was the two time champion of the famous Naddam Horseracing Festival. However, at the urging of his grandfather, who loved folk singing, he decided to study music. In 2000, Mr. Gantulga joined the Mongolian Morin Khuur Ensemble and three years later graduated from the Music and Dance College in Ulaan Bataar. He has performed in over 14 countries, including Russia, China, Japan, North and South Korea, France, Germany, Italy, Switzerland, and Austria. o, Urtaa moved to the U.S. to expose western audiences to the morin khuur and increase Americans’ knowledge of Mongolian culture. He currently teaches and performs in Seattle.