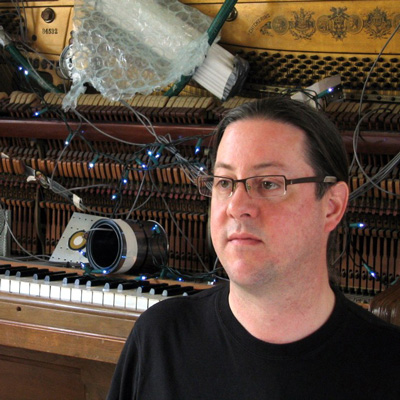 Tim Root is a composer, performer and improviser based in Seattle, Washington. His work is unabashedly experimental and a focused attempt to move music from behind the stands and towards theatre. In 1985 he was a founding member of San Diego’s Sledgehammer Theatre, a relationship that continues to the present with the Sledgehammer’s recent commissioning of A/wake (2005), Chiang Kai Chek (2006) and Beckett3 (2007) for which he received generous support from Meet the Composer Inc. for a series of lectures and workshop demonstrations surrounding the San Diego premier. This production also featured Mr. Root’s “Speaker Puppets” – large moving clusters and pendulums of speaker elements used to distribute the recorded score throughout the venue. Excerpts from his scores “Stitches (for ensemble)” and “Shoes-UI-Teeth (for percussion)” from Beckett3 will receive live performances at the Seattle Composer Salon in 2007. He leads ensemble performances of his work under the moniker “Tim Root’s Handy Metal Mart.” He holds a BA in Music Composition from UC San Diego where he studied with Bob Erickson, John Silber and Jimmy Cheatham, and an MFA in Electronic Music and Recording Media from Mills College in Oakland, California, where he studied with Anthony Braxton, Alvin Curran and Chris Brown.