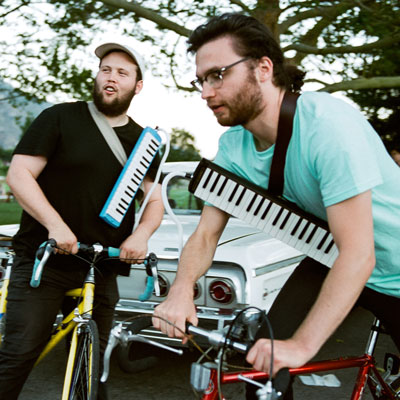 Stuart Wheeler and Jesse Quebbeman-Turley are multi-instrumentalist singer-composers who met in 2014 through the Avant GaRawge – a DIY experimental performing arts series in Provo, Utah – where they both participated as co-curators and frequent contributors. Much of their early friendship was spent driving around, listening to Ensemble Organum’s seminal recording of Guillaume de Machaut’s Messe de Nostre Dame. Since meeting, Jesse and Stuart have performed with each other in numerous bands (FunCoffin, Quiet House, COLLAPSES, Zoo Pals and NAPS), appeared together on nine albums and performed in several of each other’s operas: The Museum Of (Quebbeman Turley), The Heavenly City (Wheeler), Red Lake (Wheeler), The Beekeeper’s Journal (Quebbeman-Turley) and The 55 brides of Brileen Young (Wheeler). Additionally, the two performed in the premiers of Lara Candland and Christian Asplund’s puppet opera The God Fugitive and Christian Asplund’s Micro Passion, along with three short bicycle operas composed by Jesse. Both Stuart and Jesse serve on the board of Deseret Experimental Opera, which Jesse co-founded in 2013 with Luke Swenson and Logan Hone. Stuart holds a degree in Music Composition from Brigham Young University, and Jesse from the Performer-Composer program at CalArts.

Wednesday, July 24, 7pm Jack Straw Cultural Center 4261 Roosevelt Way NE FREE Join us for a special event with Jack Straw resident artists Stuart Wheeler and Jesse Q-T, who are producing an album of music that radically reimagines the work of medieval composer Guillaume de Machaut. They will perform some selections from this project […]