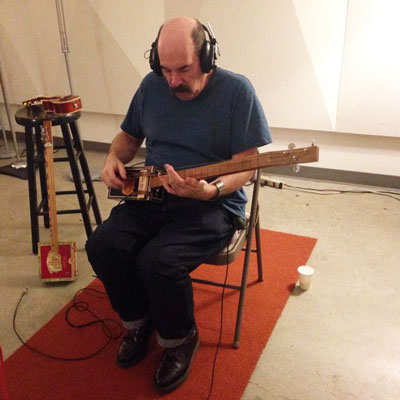 Stephen Cohen is a performing and recording artist, acoustic guitarist, singer/songwriter, composer, cigar box guitar player, and visual artist. Stephen has performed in concerts and festivals across the U.S. and in Spain. His many recordings include The Tree People and Human Voices, originally recorded in a studio in the woods near Eugene, Oregon by his creative acoustic ensemble the Tree People, and released only in Eugene in 1979 and 1984. Those albums were rediscovered around the world by record collectors in this century and reissued internationally by record companies in Japan and Spain. A 3rd Tree People album, It’s My Story, was released by Guerssen Records of Spain in 2010.

Stephen was born in Pawtucket, Rhode Island and now lives in Portland, Oregon. He has done countless performances, workshops and residencies in his home state of Oregon. He made a nationally acclaimed children’s album, Here Comes the Band, in 2006. He created a short film/music video/work of art, the Cistern Symphony, recorded and filmed in 2012 in the echo filled Dan Harpole Cistern in Port Townsend, Washington. Stephen has added cigar box guitar to his repertoire. His new solo album is appropriately named 3 String Stephen Plays Cigar Box Guitar.