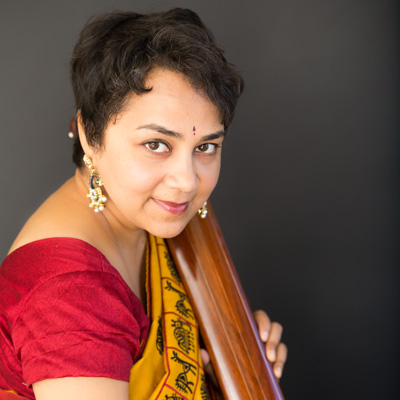 Srivani Jade was introduced to music at the age of four by her father Bhavani Prasad Jade and uncle Raghavendra Tilwalli. She studied Khayal initially with Dr. Sharad Gadre in the Gwalior style (2002-03), and since 2006, with Pandit Parameshwar Hegde in the Kirana style. Srivani also sings an eclectic repertoire of light classical music, such as,Thumri-dadra, Tappa and Bhajans. She performs regularly both in India and North America, and has sung in major music festivals such as the Sawai Gandharv Bhimsen Mahotsav (2014) and Devanandan Ubhayaker Yuva Sangeet Utsav (2009). She has five solo albums to her credit, and several grants, artist residencies and awards–including the Washington State Arts Commission Fellowship Award (2009). She has lent her voice and music to independent films such as Tapasya (2003), Siddhanto (2014) and stage productions such as Indian Ink (Sound Theater Company). She is an auditioned artist with All India Radio, and Visiting Artist at the University of Washington’s School of Music.

Artist Support Program 2018: Peace Mantra, a musical composition for female voices composed of incantations of peace from all around the world.