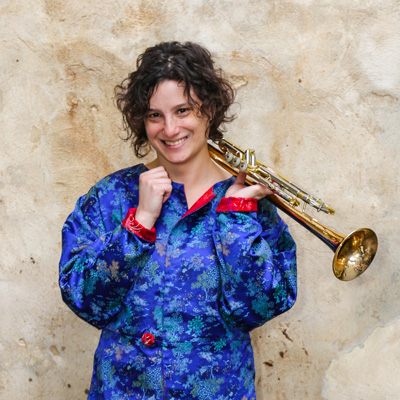 Prolific trumpeter/composer Samantha Boshnack walks her own path. Whether blasting through the alternative sonic explorations of her 14-piece alternative chamber orchestra, B’shnorkestra, leading Seismic Belt or her own quintet, Boshnack’s sound pulses with vitality.  After getting a degree in jazz from Bard College in 2003, Boshnack moved to Seattle. She toured extensively with the modern jazz group Reptet for seven years, releasing four albums comprised mostly of her compositions. Since 2011, she has led three ensembles, released five critically-acclaimed albums, and continued to tour and present concerts, workshops, and festival performances. She is a member of the Alchemy Sound Project (a composer-led ensemble featuring composers Sumi Tonooka, Erica Lindsay, Salim Washington, David Arendt, and Boshnack) who have released two records.

Boshnack has received support and commissioning funds from New Music USA, Meet The Composer, 4Culture, Artist Trust, Jack Straw Cultural Center, New York Foundation of the Arts, Earshot Jazz, among others. In 2019 she was a composer fellow at the Gabriela Lena Frank Creative Academy of Music.  She was the 2018 Make Jazz Fellow, an annual award is sponsored by the Herb Alpert Foundation to support promising, emerging composers. She has attended two Atlantic Center for the Arts Master Artist-in-Residence Programs and was selected as a 2012 participant in the Jazz Composers Orchestra Institute  (a program of American Composers Orchestra in partnership with the Center for Jazz Studies at Columbia University and the UCLA Herb Alpert School of Music).