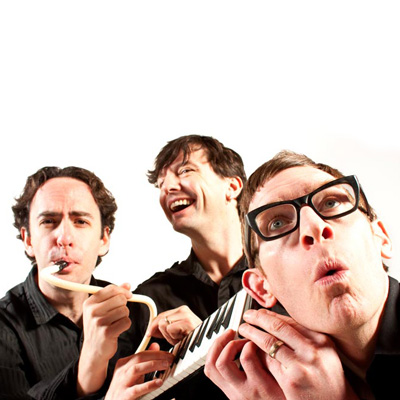 The members of Recess Monkey are three teachers who make kid’s music that grows out of their days in their classrooms. They continue to be praised across the country for singable, danceable songs that parents enjoy as much as their kids.

Praised by People, Time, USA Today, The New York Times and NPR for their pitch-perfect understanding of what gets kids excited, Recess Monkey is known for prolific album output, high-energy shows and laugh-out-loud funny lyrics that capture the essence of being young. They drink a lot of coffee. Recess Monkey has earned dozens of awards over its long history. Their 2016 Amazon Original Family album Novelites was nominated for a GRAMMY Award for Best Children’s Album.

Known for prolific, eclectic musical output and their contagiously exciting live shows, Recess Monkey strives to strike a balance between kid-centric ideas and musical authenticity. Lyrically, they weave jokes and puns together with universal childhood themes, speaking to both kids and their parents simultaneously with catchy, melodic songs. Seamlessly meshing their indie-rock roots with their keen awareness of childhood themes, the band continues to make waves coast to coast.