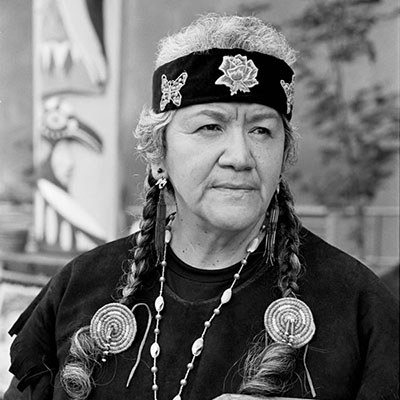 Artist, teacher, native-arts conservator, author and storyteller, Pauline Hillaire works to carry on the heritage of Washington’s Lummi Nation and is one of the most knowledgeable living resources of the Northwest Coast’s arts and culture. Known as Scälla or “of the Killer Whale,” Hillaire is a member of the Lummi tribe of Washington State’s northern coast. As a young child, Hillaire was sent to stay with various elders of the Lummi Nation, or Lhaq’temish — “People of the Sea” — to learn tribal arts, traditions, stories, songs and dances that reflected her family’s and her tribe’s value system. For weeks at a time, Hillaire learned whatever tradition that particular elder had to teach her. Her grandfather, Frank Hillaire, was the last chief of the Lummi and a spiritual leader. Her father, Joseph, was a renowned orator as well as a master carver of totem poles. Hillaire learned artistic traditions such as basket-making and Lummi songs from her mother Edna. Throughout her life, Hillaire has worked to preserve these traditions and share them with the next generations.

Hillaire is also well known for her decades of work in carrying on the efforts of her father and grandfather, who founded the song-and-dance group Setting Sun Dancers in order to preserve the art form and to educate both Native and non-Native communities in this tradition. The group has performed for more than a century in Native communities in the northwest United States and nationally at tribal gatherings and public institutions. Hillaire has taught classes on Lummi arts and culture at the Northwest Indian College as well as public schools, museums, and cultural organizations in Washington.

Hillaire was a part of Jack Straw Heritage Project: Native American Stories of Washington and the recordings made by her were released as an album, which includes 6 traditional Lummi legends as told to Pauline by her father, Kwul-Kwul-‘tu (Joseph Hillaire). Subsequently in 2010, Hillaire worked with Jack Straw ASP artist Gregory Fields for audio and DVD productions as a resource on the arts and culture of the Northwest Coast.

In 2005, the Seattle Art Museum honored her for her work as a culture-bearer and featured her work in the exhibition Song, Story, Speech: Oral Traditions of Puget Sound First Peoples. She also has two books with media: A Totem Pole History and Rights Remembered: A Salish Grandmother Speaks on American Indian History and the Future (both from University of Nebraska Press). In A Totem Pole History, Hillaire tells the story of her father’s life and the traditional and contemporary Lummi narratives that influenced his work. Hillaire is the recipient of three apprenticeship awards from Washington State Arts Commission and in 1996 was presented with the Governor’s Heritage Award.