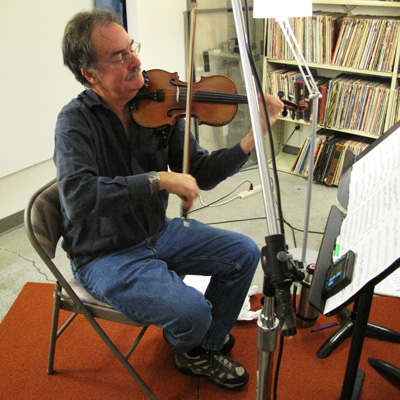 Classically trained since the age of nine, Paul played bluegrass, hoedowns, western swing and swing at an early age. He met and studied with the great jazz violinist Joe Venuti, performed regularly with him on stage, and was the only student ever invited to study at Venuti’s home in Seattle. Today he is considered one of the foremost authorities on Venuti’s approach to jazz violin.

From the mid-1970s to the mid-’80s Paul played professionally in the bands of Merle Haggard, Asleep at the Wheel, Larry Gatlin, and Loretta Lynn, performing in all fifty states, and logging over a million miles on band buses.

Paul first heard the Mexican violin genius Juan Reynoso at the Festival of American Fiddle Tunes in 1996. Moved to tears, he fell hopelessly in love with his music. The following year, he began the first of over twenty trips to the Hot Lands to study and record Juan’s music. Juan passed away at the ripe old age of 93 in 2007, but not before he recorded 2000 hours of lessons and transcribed 500 pieces. In addition to Juan Reynoso, Paul studied with a number of other Tierra Caliente maestros and acquired major archives of written music from the region.

Paul is Review Editor and writes a regular column for Fiddler Magazine. He is in great demand as an instructor at summer music camps throughout the U.S. and Canada, and teaches privately as well.

Artist Support Program 2012: Record a CD of the music of Mexico’s Tierra Caliente del Balsas with accompanying Finale transcriptions for teachers and players.