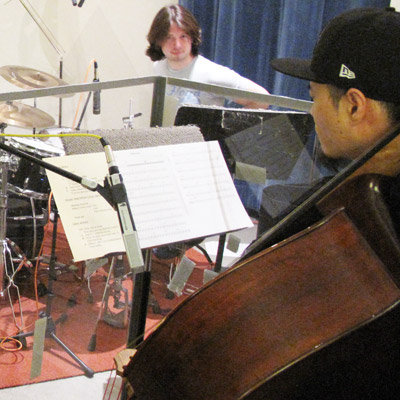 Nate Omdal studied music at Cornish College of the Arts, studying the acoustic bass with Chuck Deardorf and Ron Simon, as well as concentrated studies with Denney Goodhew, Julian Priester and Randy Halberstadt. While at Cornish, Nate was elected Student Representative to the Department Chair, received the Hadley Caliman Merit Scholarship, and was nominated for an Earshot! Magazine Golden Ear Award for his participation with The Qhromatics featuring Denney Goodhew.

Since graduating from Cornish Nate has continued to live and work in Seattle, performing in various groups for many of Seattle’s fine public and private events. In 2007 he co-founded an independent record label to support new and emerging northwest artists. In February of 2010, Nate was awarded a smART Ventures grant from the Seattle Mayors Office of Film and Music to produce a concert featuring the music of film composer Ennio Morricone. (The Good, the Bad and the Ugly, The Untouchables) Most recently Nate co-founded a non-profit (501-C3) with the Seattle-based arts management company Shunpike, to help commission new jazz compositions and collaborations.