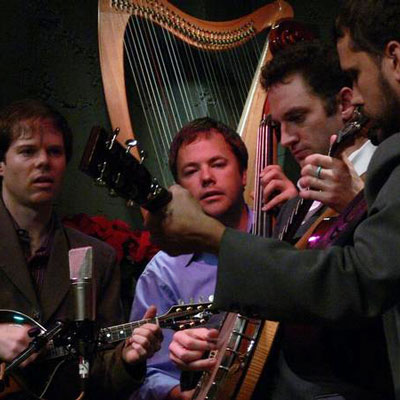 Captain Gravel began their musical experiment in 2004 as a bluegrass band. One-microphone, suit wearing acoustic music. This format served them well for several years. Slowly over time the members of the band would be replaced and the sound would shift to a point where Captain Gravel no longer became recognizable to those formerly familiar with the group. This is where we pick up the story.

Captain Gravel is a band of Seattle musicians playing a form of mostly acoustic music. There are amps on stage, a drum set which didn’t exist before and when appropriate to the room, a Hammond organ providing a sonic wall unknown to this reformed string band. Still occupying the traditional realm; acoustic guitar, mandolin and upright bass maintain their prominent roles. The change in sound and instrumentation was not calculated in ways one might assume. The band is based on a group of musicians who enjoy making music together regardless of genre preconceptions or traditional dogma. The influences are vast and the sound is diverse but seems to live somewhere between country, jazz, folk and rock.  The experiment continues and we hope that if you have a listen you enjoy what we offer.