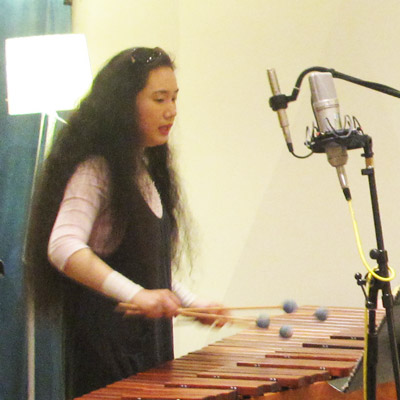 A synesthete with colored-hearing, Memmi Ochi shares her unique internal experiences through marimba performance, conducting, and multi-media presentations.  As a marimbist, she has presented concerts and recitals in the United States, Japan, Europe, and South America.  Her appearance in Lima, Perú, at the international vibraphone and marimba festival, Vibraciones, has resulted in a return invitation from the Conservatorio Nacional de Música in August 2014.  She was a guest lecturer for the Northwest Mallet Camp in 2013.  She has collaborated with dancer/choreographer Keely Isaac Meehan, and dancer/choreographer Pam Kuntz, the multi-media dance company Manifold Motion, actors, storytellers, narrators, photographers, filmmakers, and computer programmers.  Her marimba adaptation of Hildegard von Bingen’s chant, O Nobilissima Viriditas, is used for the dance film Isthmus.

Memmi received a Bachelor of Music from Western Washington University and a Master of Music from the University of Washington.  Currently, she is a Doctoral Candidate in Percussion Performance at the University of Washington School of Music, where she is the first marimbist to win their concerto competition.  In addition to her musical, teaching, and writing activities, Ms. Ochi also serves as an organizer for the Songs of Hope, a Seattle-based organization to support the Japan Disaster Recovery effort.