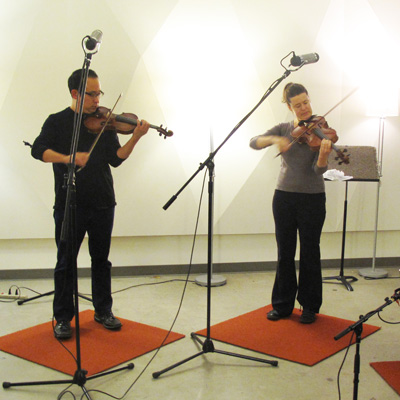 Hailed by Gramophone as “an artist of commanding and poetic personality” and by The Strad as “staggeringly virtuosic,” violist/composer Melia Watras has distinguished herself as one of her instrument’s leading voices. She has performed in venues such as Carnegie Hall, Weill Recital Hall, and Alice Tully Hall, while achieving acclaim as an established recording artist. Recent highlights include the release of her latest disc from the Sono Luminus label, 26, which features world premiere recordings of her own compositions, and video projects with violist Garth Knox (performing with Knox on his duos, Viola Spaces for Two) and video artist Ha Na Lee.

Violinist Michael Jinsoo Lim has been praised for playing with “delicious abandon” by Gramophone, described as “bewitching” and “masterful” by the Seattle Times, and hailed by the Los Angeles Times as a “conspicuously accomplished champion of contemporary music.” He is concertmaster and solo violinist of the Pacific Northwest Ballet Orchestra (“surely the best ballet band in America”—New York Times) and serves as artistic director and violinist of the Seattle-based ensemble Frequency.