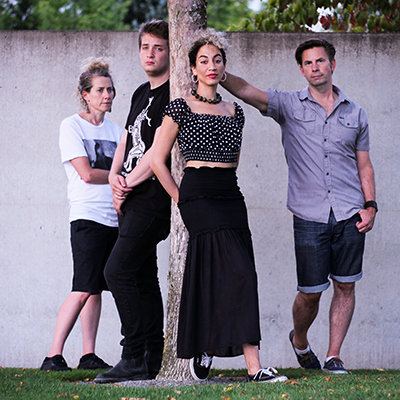 “We are the real ones, no one can take that. It’s written in our stars.” Seattle’s Medejin (pronounced meh-deh-JEAN) creates lush, ethereal, dreamwave that evokes a sense of nostalgia and melancholy. Led by songwriter Jenn Taranto (vocals/guitar/keys) with Rebecca Gutterman (guitar), Ramsey Troxel (bass), and Matthew Cooke (backing vocals/drums), their sound is euphoric with a disarming intimacy that tends to leave listeners quietly, beautifully, devastated.

Garnering attention from KEXP with the release of their debut EP “Eleni” in 2018, Medejin has performed live in-studio on “Audioasis” with Eva Walker and were featured on Larry Rose’s “Music that Matters” podcast.

Named after Jenn’s birthplace in Colombia, Medejin formed in 2016 after moving cross country from the east coast to Washington. Living most of her life in New York, she was in search of change. Rebecca, Matthew and Ramsey were involved in other projects when the four met in Seattle. Among the band’s biggest influences are PJ Harvey, Cocteau Twins and Tori Amos.