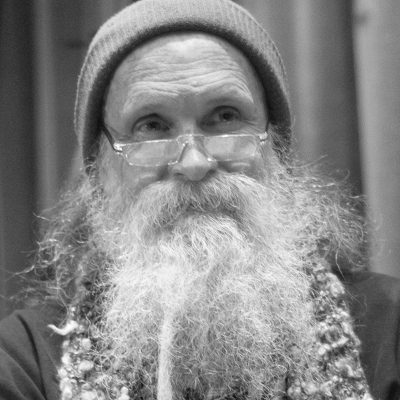 Marty Campbell started in Oakland, grew in the midwest, primarily Chicago area, Evanston. Out of college stopped growing in Indianapolis for his two-year stint as Conscientious Objector doing Alternative Service during the Vietnam War. Working in the research wing of IU Med Center putting dogs to sleep instead of people, a hard choice. He eventually moved to Seattle with an increasing contingent of households of friends who came to refer to themselves as the Indianapolis ghetto in Seattle. Marty there from ’73 through ”6. Writing all the way along, quite drivenly, but in four years in Seattle he never truly published or performed, as he had in Indianapolis, except to himself and very closest friends. That was his last stand in the city. Marty came fully into his own owning as a poet in his next home, St. Croix, USVI, 24 years, still the greater part of his adult life. Here he published, edited, performed, and facilitated readings. He also lived in the bush, made seed chains, taught math, swam distances in the oceans, and hiked. Every place he’s ever lived, he’s been closest to trees.