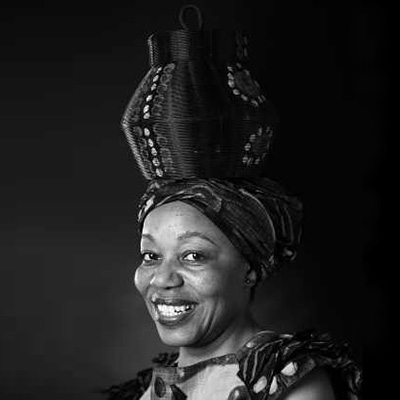 Lora Chiorah-Dye was raised first in a traditional home and then at a mission in Zimbabwe. She first came to the United States in the 1970’s to join her then husband, Dumisani Maraire.

Teaching her three children the marimba and mbira music of Zimbabwe, Lora began to create the nucleus of a musical ensemble. In 1980 she formed the Sukutai Marimba and Dance Ensemble to celebrate the heritage of Zimbabwe’s Shona people and to provide an opportunity for teaching music and dance to Americans.

With sixteen performers ranging in age from 12 to 50, they perform a variety of music. Lora and Sukutai are noted both for their performance ability and their dynamic stage shows, but most importantly for the work Lora does in training young people.

Sukutai is one of the region’s oldest African music ensembles. Its members have performed widely to critical acclaim, including several tours of Europe, Asia and the Americas.

Three songs by Lora Chiorah-Dye and Sukutai were featured in Safarini, a music album developed and produced by Jack Straw and Rakumi Arts International to promote the work of African immigrant artists. Chemtengure, a traditonal Shona melody, Mwari Komborera/God Bless Africa (known to many as the “African National Anthem”) and Nyoka Musango. Nyoka Musango (“Snake in the Grass”) is a traditional song based on a common expression of the Shona which means that you have to watch out for snakes. Many Shona songs are based on proverbs and have more than one possible meaning. They can be translated to whatever meaning suits the situation. The Safarini compact disc was released by Smithsonian Folkways Recordings in 2000.

Lora Chiorah-Dye was also one of the resident artists of Jack Straw Artist Support Program in 2007, when she recorded original songs in contemporary Zimbabwean style and new arrangements of traditional Zimbabwean songs.