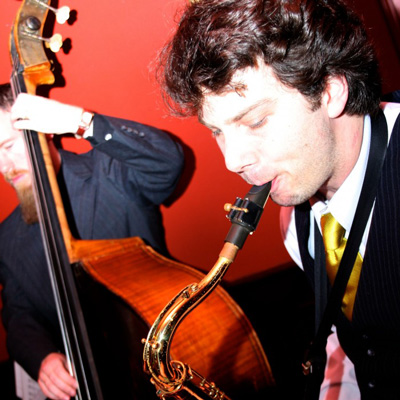 Lee Redfield enjoys creating a personal and meaningful artistic statement that expresses beauty and humanity through sound. His unique approach to jazz saxophone has its roots in rock and the blues but his arrangements and compositions are a fusion that reflect all he has absorbed in his musical studies and travels through Asia and South America.

By the age of nineteen he was performing consistently at many local venues and his recordings and compositions could be heard on regular rotation on local college radio. In his early twenties he began exploring the contra-bass clarinet and attending the University of Washington where he studied jazz and music education.

In 2007, after graduating with two music degrees and a Washington State teaching certificate,  Lee traveled to India to study saxophone with Karnatik master Dr. Kadri Gopalnath. When he returned to the United States he began his teaching career in the Bellevue School District teaching electronic music composition at Bellevue High School and jazz at Interlake and Newport High School. During summer vacations he continued to travel the world collecting melodies, scales, and rhythms to expand his repertoire. In 2008 he performed free jazz and blues in Thailand and in 2009 and 2010 he lectured at some of the most prestigious music institutes in Peru. From 2007 to 2012 Lee led his own group and ran the jazz at the Decca Hotel on Thursdays and Mondays.

In 2012, Lee began attending The University of Texas at  Austin as a graduate student in ethnomusicology while performing on weekends in the local Austin music scene. UT Austin has employed him as a teaching assistant for Music History of the 20th Century, History of Rock as well as Music difference and Identity. In 2014, he was funded by UT Austin and the U.S. Department of State to lecture and perform at The National Academy of Performing Arts in Karachi Pakistan (NAPA).

In October 2015 Lee returned to Karachi as the featured artist for the Daniel Pearl World Music Day Concert and completed his Master’s of Music at UT Austin. In 2016 and 2017 he performed with Sangat in Karachi and Islamabad. He is currently teaching as an adjunct at Huston Tillotson University.