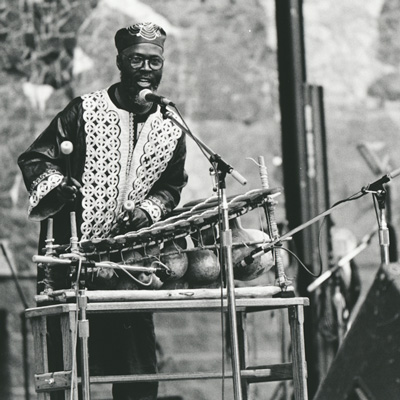 Born in Pakro, in the eastern region of Ghana, Kofi Anang exhibited talent as both a dancer and musician from his youth. After graduating from the University of Ghana’s Institute of African Studies with honors, Kofi spent seven years with the Ghana National Dance Ensemble and performed throughout Africa, Europe, and the Americas.

Having traveled for five years with the internationally acclaimed group, Oboade, in 1978 Kofi chose to settle in Seattle and pursue his individual musical vision. In Seattle, Kofi formed the group Ocheami to teach and perform African music and dance. Over the past twenty years, Ocheami has established a vast network of students and fans.

Kofi was one of the African immigrant artists whose music was featured in Safarini, a music album developed and produced by Jack Straw and Rakumi Arts International to promote the work of African immigrant artists. Safarini contains two of Kofi Anang’s songs – Hail, which uses the Ghanian kalimba to represent the sound of hail or raindrops on an iron roof, and Ko. “Ko” means “forest”, Kofi uses nature sounds and careful arrangements to create a traditional sound environment in this piece, based on traditional arrangements and using modern instrumentation. The Safarini compact disc was released by Smithsonian Folkways Recordings in 2000.

Reaching out from his traditional roots to the many influences he has absorbed in his travels, Kofi now explores ways of blending the traditional arts of Ghana with contemporary international forms of expression. The music on Safarini represents a foray into a new musical territory for Kofi and his audience. Kofi created these songs while he was a featured artist in Jack Straw Productions’ 1995 Artist Support Program. As part of this program, Kofi experimented with adding Australian didjeridu, flute, and electronic percussion to traditional African instruments.