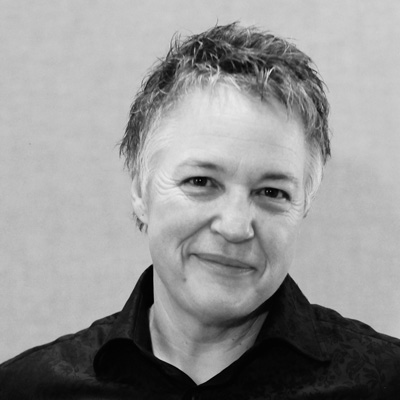 Kate Carroll de Gutes’s book, Objects In Mirror Are Closer Than They Appear, won the 2016 Oregon Book Award for Creative Nonfiction and a 2016 Lambda Literary Award in Memoir. A wry observer and writer who started her career as a journalist, Kate is a stickler for the serial comma, and also believes that there should always be two spaces between a period and the beginning of the next sentence.

Kate’s second book, The Authenticity Experiment: Lessons From the Best & Worst Year of My Life, based on her critically acclaimed blog, was released by Two Sylvias Press in September, 2017 and won an Independent Publishing Award medal in LGBTQ Nonfiction.

Kate has received fellowships from the Virginia Center for Creative Arts, the Anderson Center, Artsmith, and Centrum. An authentic and humorous teacher, Kate has taught at Pacific Lutheran University, University of Idaho, University of Puget Sound, and Willamette University, as well as at the Kachemak Bay Writers Conference. She teaches on-going classes at the Attic Institute in Portland, Oregon.