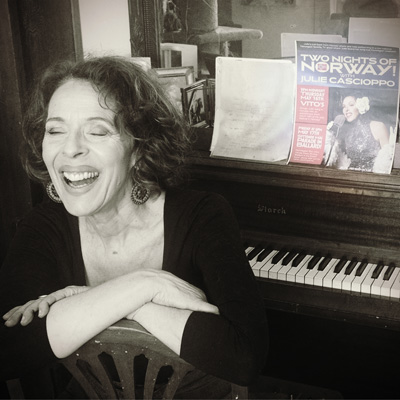 The daughter of a Sicilian meat cutter and a cool blonde Norwegian beauty, Julie Cascioppo grew up in Seattle’s Ballard neighborhood and attended Western Washington University. She originally intended to have a career as a teacher, but the call of the stage proved too strong. “I was on holiday [in the Caribbean] and a French father and son heard me sitting in with the hotel band and said I should come to Paris. So I did.” She stayed for four years, performing at a variety of venues. In 1985 she returned to Seattle, the “home port” from which she’s since traveled the world, performing in such places as Istanbul, Rio de Janiero, Istanbul, Bangkok, Hong Kong, London, Hamburg, Sicily, Brussels, New York, Los Angeles, and San Francisco. Whenever she was back home, she starred in “The Julie Cascioppo Experience,” a weekly musical cabaret revue at the Pink Door restaurant in Seattle’s historic Pike Place Market.

When not entertaining and collecting international admirers on her globe-trotting itineraries, Julie is working on her forthcoming memoir, I Love Being Abroad: Tales of a Globetrotting Chanteuse.

Artist Support Program 2019: Produce a podcast based on 10 specific stories from her memoir, I Love Being Abroad.