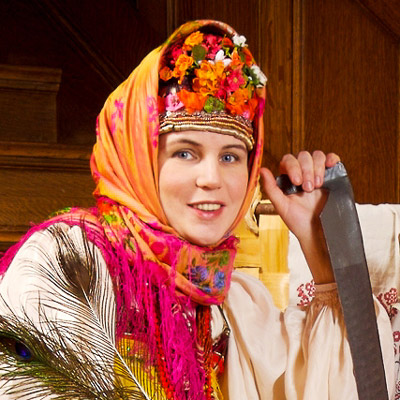 Juliana Svetlitchnaia is a Russian folk singer and an ethnomusicologist. She was born and grew up in Moscow, Russia, where she graduated from Ippolitov-Ivanov Musical Academy. Before moving to Seattle in 2005, Juliana lived in Denmark where she graduated from Carl Nielsen Academy of Music. For the last 20 years, Juliana has organized numerous ethnographic expeditions to remote villages of Russia where she recorded and learned the songs passed down through generations for centuries only by oral tradition.

Juliana is the leader of PAVA, a vocal ensemble performing Russian folk songs, and Gudochek, Russian children’s folk ensemble. Initially PAVA was founded in Denmark, and their CD was nominated for “The World Album of the Year” at the Danish World Awards (2005). After moving to the USA, Juliana founded the second lineup of PAVA. In recognition of her contribution to the Russian community of Washington State and preservation of traditional Russian culture, the Russian Cultural Center of Seattle and Consulate General of the Russian Federation in Seattle awarded Juliana “The Person of the Year” title in 2008. Juliana has also received grants from Artist Trust and 4Culture, as well as the Russel Jaqua Award for Artistic Excellence.

Artist Support Program 2014 (with PAVA): mix and master Russian polyphonic folk songs recorded in an ethnographic expedition to the Belgorod region of Russia