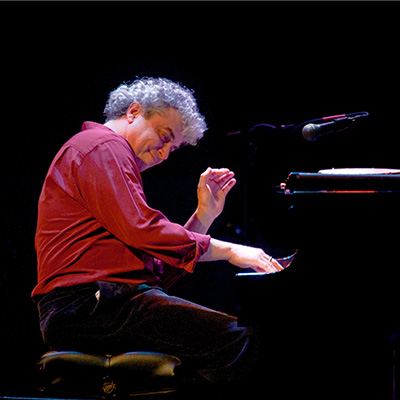 Since moving to the US from his native Rio de Janeiro in 1993, Jovino Santos Neto has continued to tour the world and to record prolifically. He has recorded multiple CDs with his Seattle-based Quinteto, including Canto do Rio, nominated for a Latin Grammy in 2004. In 2006 Adventure Music released Roda Carioca with an all-Brazilian lineup including Joyce, Hermeto Pascoal and several other notable musicians and long time colleagues, earning him a second Latin Grammy nomination. In 2007, after receiving a special commission from Brazil’s Petrobras, Jovino composed and recorded Alma do Nordeste, a musical journey translating the essence of Northeastern Brazil into melodies, rhythms and improvisations – connecting regional, universal, imaginary and real stories. In 2008 he released a piano duo with Weber Iago, Live at Caramoor, also nominated for a Latin Grammy award in 2009. In 2010 Veja o Som (See the Sound) was released, a double disc collection of duos with musicians such as Bill Frisell, Joe Locke, Paquito d’Rivera, Anat Cohen, João Donato, Airto Moreira, Joyce, Paula Morelenbaum and Monica Salmaso, among others. In 2011 Adventure Music released Corrente (Current) featuring his Quinteto performing all new original music. Jovino’s newest recording is Guris, tribute to Hermeto Pascoal done as a piano duo with the brilliant Brazilian pianist André Mehmari, scheduled to be released in June 2017 on Adventure Music.

Jovino’s compositions have been performed by the Seattle Symphony, NDR Big Band in Hamburg and by numerous jazz and chamber music groups. Jovino gives lectures, clinics and master classes worldwide on a variety of musical topics. He’s received commissions by the Cheswatyr Foundation, IAJE, ASCAP, CMA/Doris Duke Foundation, Jack Straw Cultural Center, the City of Seattle, 4Culture, Artist Trust and Meet the Composer. He has been artist in residence at some of the most prestigious music schools in the world. In 2012 he was inducted into the Seattle Jazz Hall of Fame and in 2011, 2012, 2015 and 2018 the Jovino Santos Neto Quinteto won as Best Northwest Acoustic Group in the Golden Ear Awards by Earshot Jazz. He also was awarded an Artist Trust Fellowship in Music in 2012.
He is currently working on writing his musical memoirs, to be published in the near future.

Currently, Jovino leads his Seattle-based Quinteto and teaches piano and composition at Cornish College of the Arts. He can also be heard around the world as a piano soloist, working with symphony orchestras, jazz big bands, chamber music groups, and in collaboration with musicians such as his mentor Hermeto Pascoal, Bill Frisell, Paquito d’Rivera, Airto Moreira, Claudio Roditi, David Sanchez, Joe Locke, Marco Granados and many more.

Composer in Residence 1999 : Composed a new work named “Vagalumes” for New York-based new music collective, Musicians Accord, as part of the VirtualConcert project, a national residency project that explores creative uses of the Internet in the composition of music.

Jack Straw Cultural Center announces a new series of intimate piano performances in our studio, highlighting the diversity and talent of Jack Straw Artists and the beauty and range of our Steinway B grand piano. Every other month, a pianist who has been part of our artist residency programs will perform, along with a pianist […]