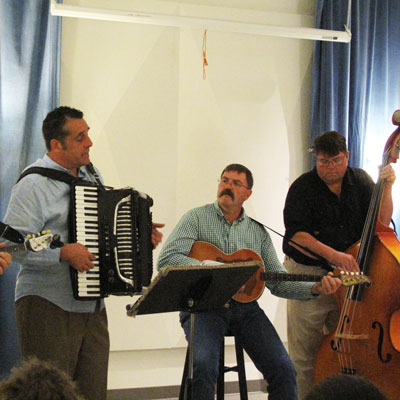 John Morovich grew up in Seattle’s sizable Croatian community. Since 1973, he has studied, taught, and performed traditional music and dance of Croatia and other parts of Southeastern Europe. He was awarded the Washington State Arts Commission Folk Arts Fellowship for 2001.  He is a featured soloist with the Sinovi Tamburitza Orchestra, artistic director of the Seattle Junior Tamburitzans, and Klapa Ruzmarin; and past conductor of the Jele Croatian Women’s Choir. For the last 10 years he has been a guest choreographer/music arranger for several Croatian folk ensembles in Western Canada and has performed with Vela Luka Croatian Dance Ensemble, Ruže Dalmatinke, Kultur Shock and Balkan Cabaret.

About Sinovi Tamburitza Orchestra: Based in Seattle, Washington, performs traditional and popular Croatian music featuring the tamburitza, a stringed instrument native to Croatia and southeastern Europe. Formed in 1981 by five members of the Seattle Junior Tamburitzans, the group is now made up of two generations of tamburitza musicians having performed at Croatian community events, weddings, and picnics and regularly appears at the national “Tamburitza Extravaganza” and at regional festivals and civic events in Washington, Oregon, California and British Columbia. Appropriately named “Sinovi” or “Sons” in Croatian, the group consists of three brothers (George, Tim and Tom Jovanovich) and two father and son sets (George and Tom’s sons Jake and Nick) and are joined by vocal/instrumentalist John Morovich. In addition to traditional dance music, the group specializes in the genre of “Becar” or “Bachelors” music made popular in the early 1920’s to 1940’s by immigrant musicians in Croatian American colonies across the United States. Members of the band are also expert teachers in tamburitza playing, Croatian folk singing or dancing and teach locally and national folklore workshops and camps.

Artist Support Program 2015: Document the musical work of the Sinovi Tamburitza Orchestra of Seattle by recording 12-14 songs that are representative of the group’s repertoire.