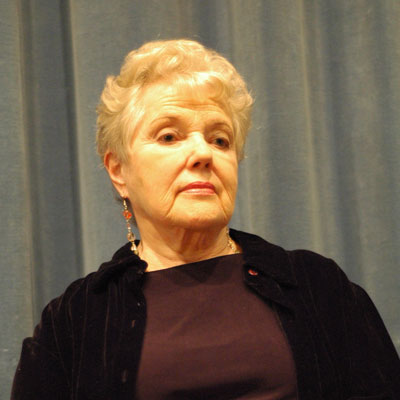 Joan Swift is the author of four full-length books of poetry: This Element (Alan Swallow, 1965); Parts of Speech (Confluence Press 1978); The Dark Path of Our Names (Dragon Gate, 1985); and The Tiger Iris (BOA Editions Ltd. 1999.) The latter two were both winners of Washington State Governor’s Awards. In addition, in 1997 Chicory Blue Press brought out her chapbook, Intricate Moves: Poems About Rape. She is the recipient of two Washington State Governor’s Awards, one in 1986 for The Dark Path of Our Names and the other for The Tiger Iris in 2000. She has been awarded three National Endowment for the Arts Creative Writing Fellowships (1982, 1990, 1995) as well as a Washington State Artists grant, an award from the Ingram Merrill Foundation, and a Pushcart Prize. Her poems also have received the Lucille Medwick Memorial Award from the Poetry Society of America and the Josephine Miles Memorial Award from Blue Unicorn. Her work has appeared in more than 50 periodicals and anthologies.

She holds a B.A. in English from Duke University and an M.A. in English-Creative Writing from the University of Washington where she studied in Theodore Roethke’s last class. She lives with her husband and no cats (he’s allergic to them) in Edmonds, Washington. They have two grown daughters and two grandchildren.