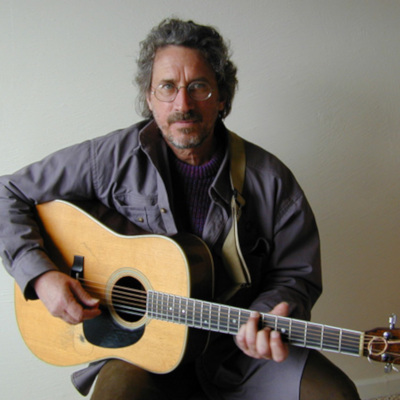 Jim Page was born in California in 1949 and grew up in the heyday of the San Francisco Bay Area in the 1960’s. The political and social awareness of those times was a part of all artistic expression and it has stayed that way in Jim’s music ever since.

Jim arrived in Seattle, where he now lives, in 1971. When the last folk club closed he took the whole city to be his stage. In 1974, after being threatened with arrest for singing on the street without a permit, Jim took on the Seattle city government to overturn the law and to legalize street performing. He sang his testimony to a packed council hearing and the streets were opened by unanimous decision. It was a landmark case and Seattle is now an internationally famous city for buskers of all styles.

In 1975 Jim recorded his first album of original music, a vinyl LP called A Shot Of The Usual, released on his own label. Two other albums followed in rapid succession. In 1977 he journeyed to the UK to perform at the Cambridge Folk Festival. The response was instant and overwhelming and he walked away with a feature in the national music press, two booking agents, and a European tour.

Jim returned to the States in ’83 and began reestablishing himself as a solo artist and as a player in the northwest music scene. In ’85 he recorded an album in Portland, OR, produced by the great Irish musician Mícheál Ó Domhnaill. 1987 saw the creation of the legendary electric band Zero Tolerance, named after George Bush’s draconian anti drug campaign. It was a tight four piece rock band with the focus on the songs. They shared stages with The Dinosaurs and Alice In Chains, made one recording and broke up, as rock bands often do, leading Jim to more experimentation, this time with the internationally famous spoon player Artis the Spoonman, who was himself the subject of a Grammy award winning song by Seattle grunge rockers Soundgarden.