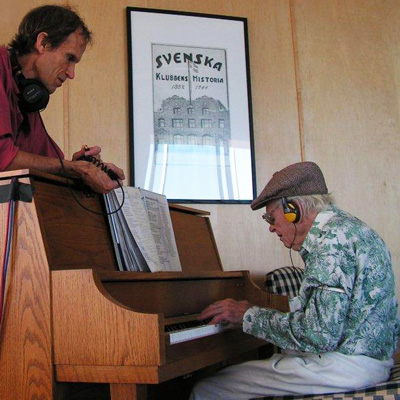 Originally from New York, Gerald “Jerry” Diamond became a Metallurgical Engineer at the University of Cincinnati in 1953. Since that time, he practiced as a research metallurgist in the development of new aircraft alloys, as Professor of Metallurgy in the U.S. and in Colombia, as Technical Editor of a research journal, as a specialist in information research, and as a translator of five languages. He was invited to Seattle in 1989 and began serving with RSVP/REV in 1993, helping nonprofit groups to reach their goals.  Around 2000, he taught himself to play piano, going on to entertain retired people in greater Seattle with 500 piano pieces. He played for about 40 retirement communities, nursing homes, assisted living and convalescent centers, senior centers, hospitals, food banks, a community kitchen, Fremont Sunday Market and the Swedish Cultural Center.

Jerry died in spring 2011, before he was able to finish his 2010 Artist Support Program project, to record a CD of arrangements of early 20th century popular songs for piano. See this Seattle Post-Intelligencer obituary for more on his life.