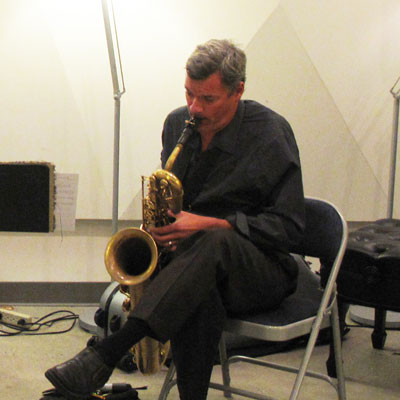 James DeJoie hails from Seattle and revels in bringing together diverse musical genres in distinctive combinations. Through his use of electronics and world-influenced rhythms, James writes and performs music that broadens the scope of what may be defined as “jazz.” He is equally fluent on baritone and alto saxophones, clarinet, bass clarinet, flute, and percussion. In addition to playing in and composing for his wide-ranging musical groups, James is also a regular contributor to such top-flight Seattle based ensembles as Wayne Horvitz and Robin Holcomb’s Washington Composers Orchestra, Tom Varner’s Nonet and the world-renowned Jim Knapp Orchestra. James has toured parts of Siberia and most of the US performing with groups such as Moraine, Jeremy Enigk, The Benny Goodman Orchestra run by Peanuts Hucko and the rock group Cheap Trick, to name but a very few.  He is also active performing classical music and was the featured soloist in a Baritone Saxophone Concerto written for him by composer David Gaines, which he recorded with the Slovak Radio Symphony Orchestra in Bratislava in 2008.