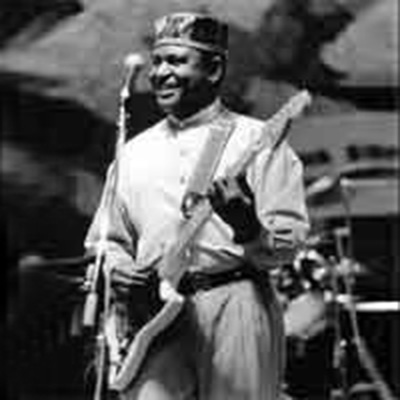 Frank Ulwenya was born into the Luya ethnic group in the Maragoli area of Western Kenya, an area known for producing many of Kenya’s top musicians.

Frank started to play guitar at age 10 and at 18 began to play in a group called the Sky Raiders, based in Nairobi, Kenya. From 1979 to 1985 he worked as a disc jockey and played in three different bands: Earthquake, Madics, and Ise Ise.

In 1985, after moving to Seattle to work for the Boeing Company, Frank started meeting with friends to play music. At the suggestion of other Kenyans, this informal group started to perform together as Ujamaa.

In 1987, Frank founded his current ensemble, L’Orchestra Afrisound, with other African and American musicians. Frank and Afrisound have become an important fixture on the local Seattle scene, especially for the East African community, for whom Frank is considered the musical standard-bearer. A key member of the Pacific Northwest Kenyan association and other African organizations, Frank and Afrisound are a mainstay at regional African community events and in Seattle clubs. More recently, Frank has been playing bass with Yoka Nenze.

Two of Frank’s songs were featured in Safarini, a music album developed and produced by Jack Straw and Rakumi Arts International to promote the work of African immigrant artists. He represented his work with Chakacha, which invites a woman named Kamitina to dance, and Safarini, with Afrisound. “Safarini” means “in transit’, but the song is really about life, from when you are born until when you are gone: “Take your time, stay cool… Only the Almighty knows our fate.” The song mentions the city of Seattle, one of the destinations on his life journey. The Safarini compact disc was released by Smithsonian Folkways Recordings in 2000.