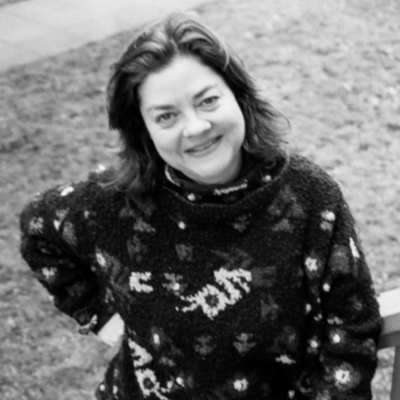 Frances McCue, an award-winning poet, inspiring speaker and self-described literary activist has become a local arts personality in the Northwest and national leader in the promotion of literature and creative writing since she co-founded Richard Hugo House in 1997. Under her leadership, Hugo House has become the literary heart of Seattle, bringing over 15,000 people each year into its theater performances, readings, classes, gallery shows, libraries and cafe. She left Hugo House in 2006, after serving ten years as director.

Frances McCue’s first book, The Stenographer’s Breakfast, was published by Beacon Press in 1992. Her poems have appeared in anthologies, literary journals and several larger magazines like MS Magazine, which published the long title poem from The Stenographer’s Breakfast. McCue has written reviews on books and visual arts for the New York Times Book Review, the Pittsburgh Post Gazette, The Stranger, The Seattle Times, and others. She has also written essays and scholarly articles for Nest Magazine, Teachers College Record, and Seattle Social Justice. She has received grants and residencies from Centrum, Artist Trust, 4Culture and Hedgebrook.

For her work in bringing the arts into community life, Frances McCue was awarded an Echoing Green Fellowship from 1998-2002. The funding helped to start Richard Hugo House and to establish it as a crucial social justice enterprise. McCue is currently an adjunct professor of Education at Seattle University and a visiting lecturer who teaches in the Honors program at the University of Washington. Her doctorate is from Columbia University where she was a Klingenstein Fellow and her MFA is from the University of Washington.