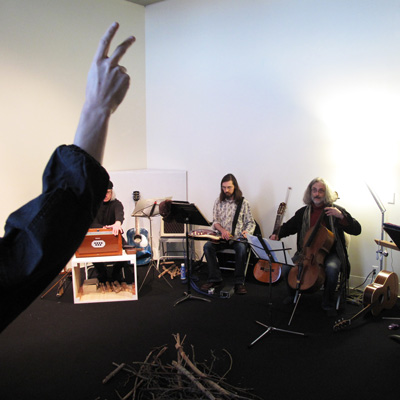 Originally formed in August 2006 to perform a student composition by Sune Smedeby, Eye Music has continued to focus on playing graphic scores since that time. Graphic scores are written music compositions that rely on visual information rather than standard notation to convey musical ideas. Often these scores are as beautiful to look at just as they are intriguing to play. In addition to graphic scores, Eye Music has also plays text scores which consist of verbal instructions for music making. In all cases, the scores used by the ensemble allow for a certain amount of openness in interpretation. These are musical pieces selected for the possibilities they inspire. They often require improvisation on the part of each performer because much can be interpreted differently each time a piece is played. However, they maintain a sense of form in one or more areas making the pieces a group activity in reaching a common goal. The openness of these compositions allows Eye Music to draw its membership from a wide range of musical backgrounds, instrumentation, and musical skill. Whenever possible, the ensemble works with guest composers on their pieces to gain a greater appreciation for possible approaches and considerations in performance of these works.