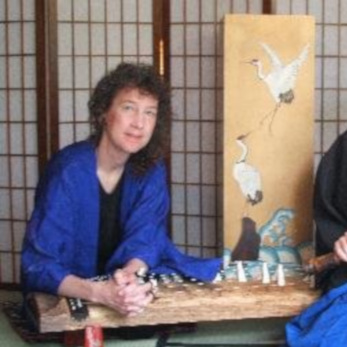 Elizabeth Falconer is one of the few American masters of the koto, a traditional zither from Japan.  She began playing the koto in 1979. She earned a junshihan (associate degree) from the Seiha Koto School, studying under Nagane Utayumi. This school focused on classical works. She later moved to Tokyo and studied under the esteemed Sawai Kazue and Sawai Tadao at the Sawai Koto School, and earned a Shihan (master’s license) at the Sawai Koto School, which focuses on contemporary works.

Artist Support Program 2005 (with John Falconer): Production of the album Affinity, by the duo En.