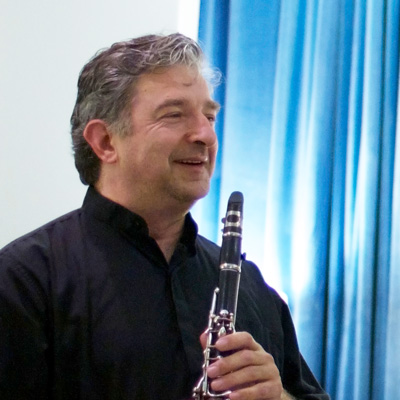 Christos Govetas is a gifted multi-instrumentalist who brings his authentic voice and earthy clarinet style from his homeland in Eastern Macedonia. After moving to this country in his teens, Christos discovered his love of traditional music and went on to learn regional music from all over Greece, and beyond. In addition to the clarinet, Christos plays the zourná, bouzouki, and outi, bringing his 30 years of performing experience to the mix. Christos is a beloved teacher at many music and dance workshops and has performed and toured extensively in the US, Canada, Europe and Greece. Christos leads the group Dromeno, plays with Pasatempo Rebetika, and also plays laouto and sings regional Greek music with Ziyiá. Christos is the 1999 recipient of the prestigious Northwest Folklife Fellowship Award honoring his cultural contribution to the Greek-American and folk dance communities. Christos is also a member of Bill Frisell’s Grammy nominated The Intercontinentals.

Christos and his wife Ruth were integral members of the traditional five-piece Greek folk band known as Pangéo, in which Christos played the clarinet, Ruth played the accordion, and both also performed as vocalists. Christos and Pangéo were part of Jack Straw’s Traditional Artist Support Program