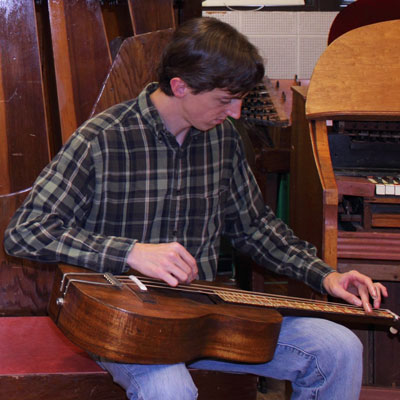 Charles Corey is an American composer holding a Ph.D. in Music Composition and Theory from the University of Pittsburgh, where he studied with Mathew Rosenblum, Eric Moe, Amy Williams, and Trevor Björklund. His approach to composition exploits and subverts the relationships that exist between different tuning systems; the results of this process range from pieces that use standard tuning systems in unique ways to works that involve multiple tuning systems working in concert. Corey’s compositions are known for their unexpected, evocative harmonies and their strong dramatic arcs. His music has been played in North America and Europe by a variety of performers including Cikada Ensemble, Iktus Percussion, Kjell Tore Innervik, Ere Lievonen, Inverted Space, and entelechron, with recent premieres in Amsterdam, Seattle, and Buenos Aires.

Corey is Director and Curator of the Harry Partch Instrumentarium and Affiliate Assistant Professor of Composition at the University of Washington, Seattle. He conducted the world premiere of Partch’s 1955 revision of The Potion Scene, and gave the first performance on Partch’s Adapted Guitar I of his original score for U.S. Highball. His current research involves the microtonal compositions of György Ligeti and the total-theater works of Harry Partch.

Artist Support Program 2018: Produce a recording of Harry Partch’s complete works for Adapted Guitar I and Intoning Voice, as well as works written for this instrumentation by other composers.