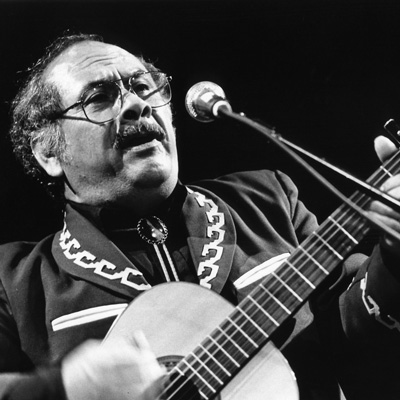 Candelario Zamudio is a Mexican singer and requinto (five-string guitar) player who is originally from Gudalajara, Jalisco.

Zamudio, who now lives in Portland, is a master guitarist with a florid, highly expressive style. Zamudio’s repertoire of over 300 compositions covers a vast range of traditional songs (rancheras, corridos, huapangoes, sones) as well as more contemporary Mexican romantic ballads, and even a few English-language love songs.

His broad vocal range and passionate singing style have been associated with romantic ballads since the early 1920’s and set him apart from modern pop balladeers like Luis Miguel and Juan Gabriel, who have been more influenced by American popular singing.

Zamudio, a self-taught musician, began teaching music at a local Mexican college for twenty-five pesos a day, before moving to Tijuana and later to Portland, where he now plays regularly at many area festivals and restaurants. He was one of the artists who participated at Jack Straw’s Traditional Artist Support Program.