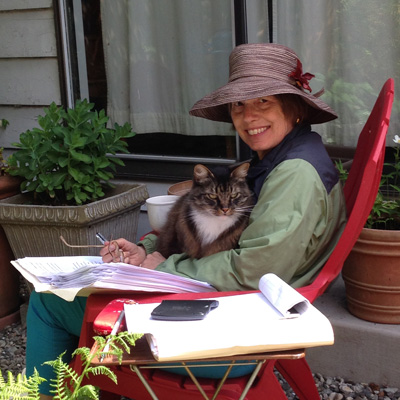 Betsy Hanson’s novel, Always Gardenia, was featured on Nancy Pearl’s Book Lust TV program and has found readers in Tasmania, Southern France, the UK, Belgium, Japan, and many US states. Ms. Hanson is the coeditor and translator, with Yukiko Tanaka, of This Kind of Woman: Ten Stories by Japanese Women Writers (Stanford University Press). She wrote book reviews for The New York Times Book Review for ten years and has received writer’s grants from the City of Seattle and The Elizabeth George Foundation. In March 2018 Ms. Hanson presented her original short story, one of the top three entries in a contest sponsored by the North American Barbara Pym Society, at the group’s conference at Harvard Law School. She wrote and directed a dozen one-act plays for community theater, and her ten-minute plays have been produced at the Phoenix Theater in Edmonds, the As If Theater Company in Kenmore, the Eclectic Theater Company in Seattle, and the IPOP short play festival in Olympia.